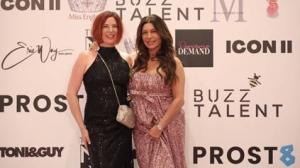 ICON combines the worlds of fashion, show business and music to raise funds for charity. On Sunday, we were able to celebrate fashion as well as our dedicated monarch while supporting the charity Prost8.

The event attracted 700 people from the fashion world, including models Coralie Fox and Emma Lucilles, dancer Abbie Quinnen, Ms Great Britain 20/21, April Banbury, R&B artist Kule T who was the lead singer of 90s band MN8, and actor-singer-songwriter and model Emin Zada ​​Electro who was a striking presence at the event sporting his classic outlandish style.

The organizers paid tribute to the late Queen Elizabeth II by starting the proceedings with a short speech by the Reverend Peterson Feital before a minute’s silence at 8 p.m.

Following this, the models showcased Malan Breton’s stunning collection of men’s and women’s clothing, crafted in a variety of fabrics and featuring a color palette ranging from shades of blue to bright warm colours, before culminating in an elegant show of full length black dresses made in tribute to the late queen.

Diversity is quickly becoming a wider trend in the fashion world and Breton’s fashion show reflected the wide faces and shapes found across the globe while Nathan Palmer’s show, which also focused on contemporary trends, highlighted utility as well as fashion to reflect new tastes that place a high value on durable, usable clothing.

Musical entertainment followed by Lucy Penrose, who plays the lead role of young Judy Garland in the West End musical JUDY! She performed one of the Queen’s favorite songs, ‘Over the Rainbow’, to a crowd that had gathered in the name of fashion but eager to show respect to the longtime monarch.

Most of the clothes on display were modeled by Gaia, the daughter of famous actor couple Emma Thompson and Greg Wise. Also in attendance was Gaia’s actor boyfriend Basil Eidenbenz, who appears in Eskel – the hit Netflix series The Witcher, playing a friend of the main character, Geralt.

In 2021, ICON I combined the worlds of fashion, show business and music to raise funds for NHS Charities Together and WellChild; this year, the event supported Prost8.

Helen Georgio of Buzz Talent explained, “The goal of ICON is to combine fashion and music with other art forms and leverage the spectacular talent we have on screen to raise significant amounts of money for charities. On Sunday we were able to bring people together to celebrate fashion as well as our dedicated monarch while supporting the charity Prost8.”

The mission to raise funds for Prost8 is urgent, as explained by Paul Sayer, the charity’s founder who has followed his own journey through the diagnosis and treatment of prostate cancer: “About 12,000 men each year with low-grade prostate cancer will only be offered the same aggressive procedures as men with much more advanced cancer, leaving them to suffer life-altering side effects.

Remarkable medical advances such as HIFU and focal therapy can provide a lifeline to thousands of men with low-to-medium grade prostate cancer and offer them more targeted and less invasive treatments without a litany of side effects.

Prost8 is trying to raise funds to buy, donate and deploy at least six breakthrough minimally invasive treatment units in NHS hospitals to prevent men from being unnecessarily overtreated for prostate cancer while lobbying the NHS and the Ministry of Health to scale up and roll out this treatment more widely.

Paul Sayer added: “Each suite costs around £400,000 and the charity is only £40,000 away from being able to roll out the first of new Prost8 focal treatment suites, each of which can treat hundreds of men each. year for decades. We hope to get closer to this goal through the support of those attending ICON II who have had prostate cancer in their family as well as donations made through the association’s website at the address prost8.org.uk.”

A link to Prost8’s work was revealed overnight by singer-songwriter and actor Emin Zada ​​whose close friends and family have suffered from prostate cancer and model Emma Lucilles who has also seen firsthand the aggressive and painful experience of the victims.

Prost8 – One in eight


EIN Presswire’s priority is source transparency. We don’t allow opaque clients and our editors try to be careful not to weed out false and misleading content. As a user, if you see something we missed, please bring it to our attention. Your help is welcome. EIN Presswire, Everyone’s Internet News Presswire™, attempts to define some of the boundaries that are reasonable in today’s world. Please see our editorial guidelines for more information.